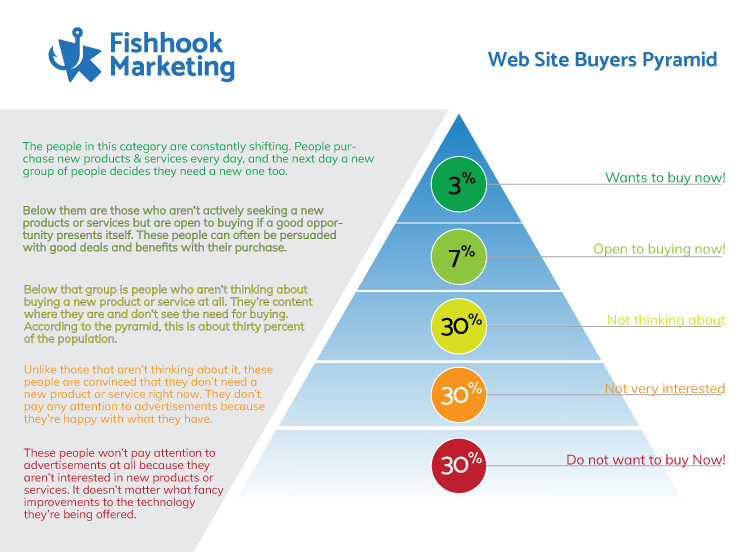 What’s the best way to advertise a product? You might think that showing off the product and informing the public where they can buy it is enough, but that’s not always the case.

In fact, according to the Buyers Pyramid by Chet Holmes, only about three percent of the population pay attention to such advertisements. So how do you improve your advertising and increase sales?

The Buyers Pyramid might just have the solution you’re looking for. By examining it and why people don’t want to purchase products, you can persuade more people to buy your products.

Read on to learn about the Buyers Pyramid and how it can help your business.

What is the Chet Holmes Buyers Pyramid?

Chet Holmes’s Buyers Pyramid is a tool describing who businesses are targeting with their advertisements. However, it focuses on quantity rather than demographics. The pyramid divides the population into five categories based on their willingness to buy a product.

People in the market for smartphones right now are a good example to start with.

Starting at the top of the pyramid are those who are currently looking to purchase a new product such as a smartphone. This is the smallest section because it holds the smallest amount of people. Chet Holmes suggests that all businesses can assume that only three percent of the population are interested in buying products such as smartphones at any given time.

The people in this category are constantly shifting. People purchase new smartphones every day, and the next day a new group of people decides they need a new one too.

The good news is that there is a steady flow of people in and out of this category. The bad news is that this is the group that is paying the most attention to advertisements.

They’re looking for advantages and disadvantages of every available smartphone, so they watch when a commercial comes on the television. They’re actively seeking out which phone and service provider are the best choice for them.

In other words, only three percent of the population is paying close attention to any advertisements a business releases.

Below them are those who aren’t actively seeking a new smartphone but are open to buying one if a good opportunity presents itself. These people can often be persuaded with good deals and benefits with their purchase. According to the pyramid, this category contains between six and seven percent of the population at any given time.

Some of these people will choose to make a purchase. Others will decide they either don’t need to make the purchase or that it isn’t the right time to do so yet.

These people are also paying attention to the advertisements businesses release. The difference is that they don’t pay as close attention, because they don’t feel a sense of urgency to make the purchase. The good news is that the right advertisement can persuade them to move into the “buying now” category.

Not Thinking About It

Below that group is people who aren’t thinking about buying a new smartphone at all. They’re content where they are and don’t see the need for buying products. According to the pyramid, this is about thirty percent of the population.

The good news is that this will eventually change. Their smartphones become outdated or damaged.

But in the meantime, these people aren’t paying attention to advertisements. They don’t care to look at new smartphones because they haven’t considered that a new one might benefit them yet.

Occasionally, one might catch their eye and convince someone to move from this category into the “open to buying” or “buying now” categories. However, most remain in this category until time creates a need for them to buy.

In other words, public advertisements aren’t affecting this group very much at all. If a business wants to sell products to this group, they need to rethink their strategy.

The next group is people who think that they aren’t interested. This is another thirty percent of the population.

Unlike those that aren’t thinking about it, these people are convinced that they don’t need a new product right now. They don’t pay any attention to advertisements because they’re happy with what they have. It’ll be much harder to convince these people that they should purchase a new smartphone.

The good news is that many of these people may be interested in new products and the benefits they offer despite not wanting to purchase. They often move from this category to the “buying now” category if they can see the immediate benefits of purchasing the product.

Once again, however, businesses need to redirect their strategy if they want this group to purchase their products sooner rather than later.

Finally, the last thirty percent of the population is at the bottom of the pyramid. This section consists of those who know they aren’t interested in making a purchase right now.

They might have recently purchased a new smartphone, and therefore aren’t interested in the new one released a week later. Others may not feel like they need to hurry to get the newest one when their current one works fine.

They won’t pay attention to advertisements at all because they aren’t interested in new products. It doesn’t matter what fancy improvements to the technology they’re being offered.

If they already purchased the newest smartphone, then there’s no persuading them to purchase another one so soon. They may feel they don’t need certain services from other industries like a chiropractor. The good news is that they’re already a customer that may persuade their friends to get one too.

Others simply won’t be willing to listen to arguments for why they should purchase a new smartphone.

Why this is Relevant to Business Development

Many businesses turn to mass advertisements to inform the public about their products. This seems like a good idea, but it’s not enough to persuade everyone that they need to purchase that product as soon as possible.

Again, according to the pyramid, only about three percent of the population are paying serious attention to advertisements. These people are ready to buy right now and are weighing their options.

The final thirty percent of the population isn’t interested in purchasing at all. There is no amount of information about a product and its benefits that will persuade these people into buying products.

The good news is that there’s about sixty-seven percent of the population that could still be persuaded into purchasing a product. Instead of trying to show these people what they’re missing, selling products to these people requires teaching them about what they currently have and other competitors on the market.

The issue is that most companies advertise with a hard sell. Their ads don’t give a lot of information that’s relevant to the target audience. So when the ad says “call today,” only three percent of the population that sees it will respond.

The only question left is how to approach the other sixty-seven percent and convince them to buy a product such as attending tattoo art classes.

There are three key things that you should be doing to encourage people to purchase your products. If you want your advertisements to reach more than just three percent of the population, then these are the things your ads should include in them.

The first and most important thing you can do for your advertisements is to include information. Answer all of the most basic questions that someone might ask before purchasing. Some good examples might be:

Try to demonstrate the product and how it works if you can. Make sure there’s a place for viewers to go for more information if they still have questions. This gives those who are in the middle three categories a good place to start to learn more about your product.

If people don’t have information, then they won’t see the purpose of your product. Most people won’t go through the effort of doing a lot of research on their own.

Informing the people about your product and how it helps them arms them with the knowledge they need to make a good purchase when they’re ready to. You have an opportunity to do better than your competitors by doing this. They’ll understand more about your product than other similar products, so you’ll increase your business sales much faster.

Try to get focus groups to test your products for you. Let them ask questions about the product. Anything questions that come up a lot should be addressed in your advertisements.

Try to understand what it is your potential customers are looking for in a product. Different demographics are looking for different items to help them in their daily lives. Your advertisements should reflect the scale of what your product can do and how many people it can help.

A great way to do this is to tell your audience about themselves.

For example, when selling a computer, you want to think about who will want that computer. If its battery is designed to last for a long time, then targeting people who work on the go is a good idea. A gaming computer should advertise space and graphics quality to encourage video game players to purchase the computer.

Those who work with large files on computers a lot benefit from workstations with a lot of space on them. Furthermore, many people feel the need to multitask, so if a computer can run many programs at once, then this is a great selling point.

Your audience may not be experts on your product, but they know what would help them with their work or hobbies. Advertisements should show them that you know this too.

Finally, some people might be interested in your product, but not ready to buy it just yet. They may have recently purchased a similar product and want to wait until it isn’t usable before they purchase a new one.

But eventually, everything needs to be replaced. When this happens, it’s always best for people to know what options they have available. They should know what products they want to purchase when it’s time to buy new ones.

You want your advertisements to encourage planning for the future for this reason.

Let your advertisements arm potential customers with information. Make sure that this information stays updated and useful to anyone who might move into the “buying now” section of the buyers’ pyramid.

This way, when people are ready to move into the top two layers of the pyramid, your business is the first one that comes to mind. It’s also the one that they know the most about when they start shopping, so they’re more likely to buy your product than someone else’s.

And depending on the product, you may even encourage purchasing your product now so that customers have it later when they need it.

The Chet Holmes Buyers Pyramid is a fantastic guide to increasing your business sales right now. By adjusting your advertising strategy, you can move more people into the “buying right now” category much faster.

Furthermore, a great place to start is with your business’s website. Here at Fishhook Marketing, we specialize in helping your website generate more sales. We’ll design a website for you that is easy to use, looks professional, and earns you more money.

Contact us today and see how we can help your business.